I started a new rack with eurorack modules. The goal is to add some very creative and interesting modules that you can hardly find in 5U. So i'm focusing on special modules becuase i already have a lot of basic VCO VCF & so on. I started with some make noise modules because you can't find these in DIY and now i'm adding some modules to this. Also i want to add modules that will be usefull in a rythmic type of sounds because that's what i'm missing and can't find with samples or vst tools.So The first i did is a Pingable Envelope Generator from 4ms. A very nice dual AR envelope that has many functions to shape the curves. It will be nice for rythmic sequence and as it is pingable it will be a good addition to my 5U ADSR envelopes. So you can do LFO with it and you get some CV to control parameters so ... lots of fun.I was so happy to receive that kit i instantly did it .. with no pictures :p I'm sorry. In a sense it's a good news, it means that it's really an easy one to build and calibrate. But i'll try to give an overview.

I orderd all from THONK + some mutant drums i'll cover later on. Everything arrived to France in a week in a nice safes packed (but little : s ) box.3 little bags with components and pcbs + faceplate. EVERYTHING is here. You don't need to buy extra nothing for this kit so that's good. But also you don't have any spare so don't loose or break stuff. Only thing that was "wrong" in my kit is a Female header that had 8pins instead of 6. I just had to cut the extra one and i had enough space on the PCB to install it. The other kits i have (mutantbassdrum / hihats) don't come with parts and it's always a longer time + questions to find everything.Also you have a nice color printed explanation on how to build this and a list of all parts in color. Of course i suggest you follow the instructions carfully and also note on the parts list the one you have mounted already.

As the instruction guide is absolutly good, i won't bother explaining in detail how to build this. But just to mention i had no major problems building this kit. True some parts and holes are small but really nothing that made soldering difficult. MAKE SURE your Male pin headers are straight as the instructions ask for. Once the 2 PCB are connected, i'm not sure it's easy to seperate them :p Good thing you can still access to the trimpots to calibrate the BP Offset.

At one point you have to add thehex nuts on the female jacks. The doc tells you like 2 or 3 time to be carefull not to scratch the surface... so BE CAREFULL. Alothough i WAS carefull i did a tinny little scratch :p surface is a plastic thing that is indeed very easy to scratch ! Now patch the power chord to the rack (off) then plug it to the module. where some protection glass and earplugs (Last kit i did a small 20pF capacitor blew off and it was such an explosion that i felt like someone shot a gun in my room. There's still mark in the ceeling !) Everything was find on the first power up. It's nice ! bliking colored, sexy and VERY USEFULL.

The overall process took 5 hours so for the price the only mistake i did was not to get 2 units.

i'll post some vidz and pix later one as i don't have super much time right now but it's working great with ping going in you instantly have some nice LFO's for your synced modules around it really is a game changer for me compared to my 101 dotcom q109 :p 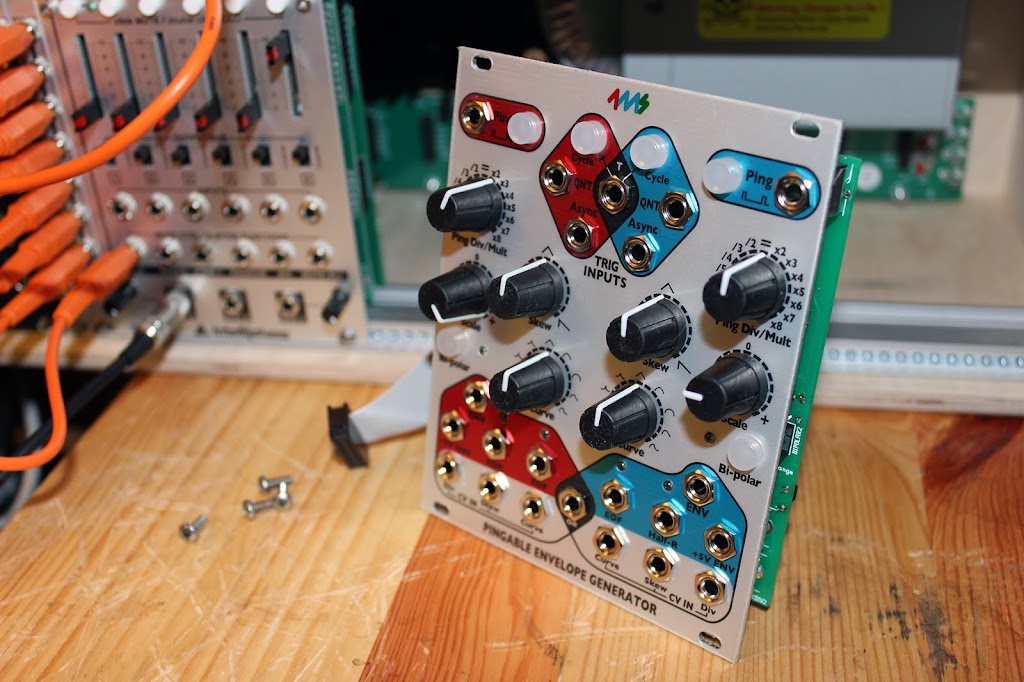